Keep the garden growing!
Guarden is a tiny table-top role-playing game of horticultural problem-solving and gnomish magic, based on the Four Points RPG System.
Play as a Gnome, or community of Gnomes, tasked with the protection of your garden. Fix problems and resolve disputes, using your skills, teamwork and even magic, all the while avoiding the notice of the "big folk".

Files overview
This game comes with a printable, reversible booklet, that functions as a gnome-sized overview of the game and quick rules reference. This document includes instructions for assembly and printing.
The Text-Only document contains the full rules, as well as a section on playing safely, with a link to a curated collection of safety tools. This document is tagged and formatted for screen-readers.

Other info
I might be designing and adding a small character sheet in the future.
If there are any issues with any of the files, please let me know!
The Four Points RPG System SRD is available at the link below:
Four Points SRD

In order to download this TTRPG you must purchase it at or above the minimum price of $2 USD. You will get access to the following files:

Support this TTRPG at or above a special price point to receive something exclusive.

A free copy of Guarden!

For every copy of Guarden that is purchased, another Community Copy will be added.

Hi there, I am not sure of the best place to ask questions, so please let me know if there's a more preferred way.

I created a Gnome and was getting ready to play when I noticed there wasn't a suggested sequence of play or turn order.  I ended up looking in the Four Points SRD and saw the Turns there.  As this is my first Four Points game, I am confused on how combat or competitive situations are resolved.

I see that it's player facing rolls, but how do you account for what the opposing side is doing?  Is this narrated based on a failure of the character's action?  A quick example is if I'm using the plot hook of birds pecking seeds in the garden.  Let's say the birds are circling. If I were doing some action to keep them away such as swinging a garden implement around, is a failure something the birds get to do such as I fell down and the bird swooped in to get the seed? Or is there some other way for the bird to take actions?

So whatever the opposite side are doing is up to the Guide, or GM. I apologize if the game came across as being a solo RPG!

As Four Points is more narrative than turn-based combat focused, the player group could decide that the bird getting the seeds counts as its turn, or that the bird can try pecking at a gnome while the next character is getting ready to fend it off. If the GM says the bird is going to try pecking the next player’s gnome, that player can evade the attack as an Action, either by spending EP or testing their luck.

I hope that has cleared things up a bit!

Thanks for your reply, it helped clarify how it should flow.  I did understand that it wasn't directly intended to be a solo game, but either way needed to know how the GM role would run the game.  Thanks again, I look forward to continuing! 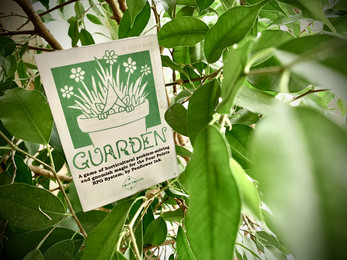 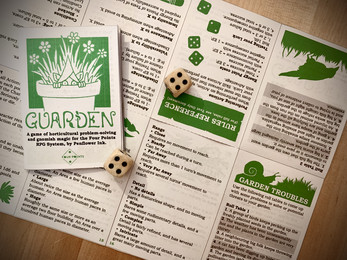